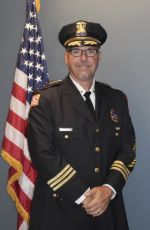 James Frankoski has served with the Rensselaer Police Department since 1989. He was promoted to Sergeant in June of 1999 and to Deputy Chief in October of 2000. In May of 2018 he became Acting Chief and permanent Chief in August. 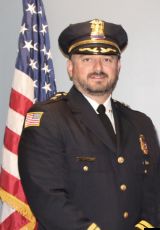 Warren Famiglietti joined the City of Rensselaer Police Department in July of 2003.  In October of 2006 he was promoted to the rank of Sergeant which he held until being promoted to Deputy Chief of Police in August of 2018.  He has prior law enforcement service with the New York City Department of Correction, where he served as a Correction Officer on Rikers Island.  Deputy Chief Famiglietti attended the State University of New York at Stony Brook and holds an Associate Degree in Arts with Highest Distinction from Suffolk County Community College.  Throughout his career , Deputy Chief Famiglietti has earned Department of Criminal Justice Services and  Municipal Police Training Council certifications as a General Topics Instructor, Firearms Instructor, Defensive Tactics Instructor and SWAT Operator.  With training as a priority, he is a member of the Zone Five Law Enforcement Training Academy Advisory Board, member of the International Association of Chiefs of Police, New York State Association of Chiefs of Police, North East Chiefs of Police Association, National Tactical Officers Association, New York Tactical Officers Association and many other organizations.  Deputy Chief Famiglietti has served on a multi-jurisdictional tactical team for over 15 years where he held multiple titles including Team Leader.   This tactical experience allowed him to develop relationships with many Local, State and Federal agencies in order to share resources during emergency operations.  Moving forward, Deputy Chief Famiglietti would like to continue the department’s commitment to sharing resources and continue a tradition of quality training, equipment and professionalism throughout the rank and file.

The Patrol Division provides the primary public safety and law enforcement services for the City of Rensselaer. The Patrol Division is comprised of five (5) Sergeants and eighteen (18) Patrol Officers. This division operates three, eight hour shifts, The 1st Platoon (12:00am – 8:00am), the 2nd Platoon (8:00am – 4:00pm), and the 3rd Platoon (4:00pm – 12:00am).

The primary goal of the patrol division is the prevention of crime and disorder by adhering to the community policing philosophy. Patrol Officers provide uniformed patrol coverage to all areas of the city. Officers conduct patrols on foot, bicycle, and in motor vehicles. They respond to emergencies such as crimes in progress, motor vehicle accidents, injuries, illness, and fires. They routinely investigate citizen complaints; provide traffic control and enforcement; and attend community based meetings.

Working independently and with others in the department, detectives employ investigative techniques and strategies to identify suspects and make arrests. They frequently utilize crime analysts who are equipped with modern technology that allows them to closely monitor criminal activity for early signs of crime patterns and trends.

The City of Rensselaer Police Dispatchers performs some of the most important tasks within the department. They are trained professionals committed to assisting the public by gathering and distributing information quickly and efficiently. Their main responsibilities include: Entering and relaying requests for data from eJusticeNY (Integrated Justice Portal); entry and maintenance of the police blotter and other police records. Receiving calls for service and information from the public for police and fire, other emergency services and units on patrol. Receiving, monitoring and replying to police and fire radio traffic. Recording, prioritizing and assigning calls for service.